In case you don’t know me, I’m white. I was raised in a white family. I married a white man and had two white children. And then we adopted an Ethiopian child. And we did all the right things: we read the books, attended the trainings, watched the videos.  I knew life would be harder as a transracial family. I knew we were ready.

And at first, it was great. I felt righteous anger whenever I heard a racist remark and would spend the rest of the day feeling morally superior.  I got to participate in conversations with Black friends about hair and skin and culture and the importance of having good role models of color in his life. I learned so much.  I fielded compliments about the dazzle of my child’s smile and the awesomeness of his curly hair. His first week home, Black men stopped me out in public to tell me how beautiful my son was. That had never happened with my white babies.  I was thrilled.

But I didn’t know.

I didn’t know that I would fill with fear when I see my child playing with a toy gun at the pool. And how I know the parents around me are thinking about how I’m way too overprotective and strict when he’s in trouble for it because he knows our family rule is “no guns.” But I will NEVER let my precious boy play with a gun. Because in just a few short years he will be 12 like Tamir Rice was. And what if he has a toy gun on a playground and someone calls the police? Or what if he’s just looking to purchase a bb gun in Walmart like John Crawford when he’s a young man? Or what if he decides as an adult to own a real gun and is shot for having it in an open-carry state like Alva Braziel, Alton Sterling, or Philando Castile?

I didn’t know that I would have to start talking to my child at the age of four about how important it is that he be respectful and polite, not just to police officers, but especially to police officers. Not because I want well-mannered children (which I do) but because it might save his life one day or at least keep him from gaining the attention of adults should something go awry in his near vicinity and he be blamed.

I didn’t know that I would have to hold him after we told our children about yet another racially-motivated shooting as he looked at me, wide-eyed, and said, “I hope that doesn’t happen to me” while his brother and sister cried and hugged him. I didn’t know I’d have to try to empower his white siblings to know how to stand by him while also trying to help them manage their own fears for him.

I didn’t know. Because I hadn’t listened.  Black people have been telling us these things for decades. I didn’t think I was racist – I wanted to adopt a Black child, how could I be racist? My most shameful confession is that I didn’t care to know exactly how hard it is to be Black in America until it was my own child who faced it. I regret that with my whole being. You have no idea.

And this post shouldn’t even be about me. This isn’t about how hard it is for me, a white woman, to be raising a Black boy. Instead it’s a plea for my white friends and family to listen.  Listen to Black voices. Check your Facebook friend list, your Twitter feed, and, most importantly, your real-life friends. Do you have Black voices speaking into your life? If not, why is that? And when you do: please listen. Believe them. That fear is real. Racism is real. Believe them when they tell you that #alllivesmatter is more harmful than helpful. Believe them even if every single thing they tell you doesn’t line up with what you think. Their life experiences are just as real as yours. Before I was the parent of a Black child, racism was something I could fight against when it was convenient for me to do so. I could take a break from it when I wanted to. I’ve lost that privilege.  I regret every moment I didn’t spend listening.

My sweet boy is beautiful. He’s joyful, his eyes sparkle. He’s a pleaser and he always wants to make the right choice (even though he often doesn’t, bless his heart). He loves kisses and he loves to laugh. He’s silly and sweet and wonderful.  Everyone who meets him falls in love with him. He is, by far, my most personable child. But when he gets older, he’s going to look like those men you saw in those videos who were shot & killed. He’s going to look like 12 year old Tamir Rice on the playground.

What’s going to happen to him when you no longer see him as cute and instead he’s menacing, a threat, a scary Black man?

I don’t want to know. 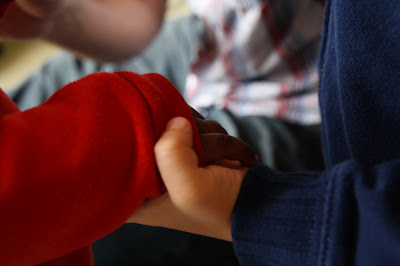 Posted by Kirstin C at 7:22 AM No comments: Links to this post