The Problem with CLEARLY

I have seen these words about 47 billion times since the SCOTUS decision. I'm actually kind of wondering if anyone in my life ever said those words to me outside of the gay marriage issue.

But there's a problem. There's very little that the Bible is truly CLEAR about. I believe the Bible clearly says that Jesus died for all of us because God loves us that much. But there are Christians who would disagree with me even on that (the ALL part).

Here's the deal: As Christians, we believe the Bible is Truth. We use lots of different words to describe that Truth: inerrant, infallible, inspired, Word of God.

I believe all those things about the Bible: it is inerrant, it is infallible, it is the inspired Word of God. However, I don't believe those things about anyone's interpretation of the Bible. Including my own. I hold my theology loosely. The minute I start claiming my particular interpretation of the Bible as "The Truth," it becomes quite a mess.... um, kind of like the one we are in now.

The Bible wasn't written yesterday. There are layers of information to sift through: cultural norms of the time when it was written, the position and history of the writer, the purpose of the writing, what tradition says. We also have to weigh it against new information (for example: the Bible talks about the four corners of the Earth so until science caught up, the belief held that the Earth was flat and had four corners. Now, of course, we consider that passage to be figurative).

So we have to "pick and choose."

Okay, okay. I know that's a bad word in the Christian world. But we really do. We have to choose how we are going to look at different passages. We don't do it arbitrarily - we do it with a lot of prayer, a lot of study, a lot of discourse with others in the Judeo-Christian tradition. We look at what we've traditionally believed and decide if we still think that's right. We also look to see if a particular view is "bearing fruit" - meaning, is the result of this belief bringing love, joy, peace, patience, kindness, goodness, faithfulness, gentleness, and self-control (are you singing the song with me?).

A lot of Christians like to claim that we own absolute truth. 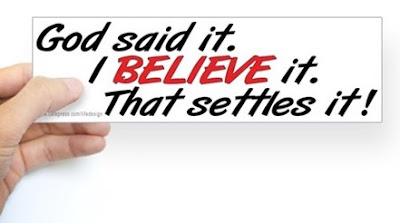 But this is so dangerous. Guess what? The vast majority of us are going to find out one day that we were not right about everything we believed the Bible said. I know for a fact I'm wrong about some stuff. I just don't know which stuff yet. Look at our history. All of these things have been said are CLEAR in the Bible:

We've changed our views on these "very clear" issues through much study, discussion, and gnashing of teeth in some cases. Some Christians still believe the Bible mandates a secondary role for women, but now those folks typically say it's "complementary."

I hear you if you believe the Bible CLEARLY says that same-sex relationships are sinful. I've seen the verses. At face value, it appears you are right. But maybe you could hear me too? I've studied, I've looked at cultural lenses, I've looked at the overall message of the Bible as it relates to marriage. Plus I now know gay people who love Jesus and whose relationships are "bearing fruit." And I don't think it's so clear anymore. I'm not going to tell you the Bible CLEARLY affirms gay marriage but I can no longer say with certainty that there's no place for my gay friends' marriages in God's eyes.

What if, as a Church, we took a stance of humility. What if, instead of the bumper sticker above, we said this to the world:

"We have this beautiful book. It's a love story. A story of how the God who created us is both letting us have the free will to mess everything up but also inviting us to be part of redeeming the mess we've created. He loves us so much that he sent his son to die to atone for all the ways we've failed. We are always working together to hammer out the details, but one of the promises in the book is that God says he'll live in you, he'll guide you, he'll start to change your life when you choose to follow him. He says he'll make our hearts more like his: we'll love more, we'll fight for those without a voice, we'll seek to end poverty, injustice, oppression. We will, together, lift one another up by putting the needs of others above our own. You are always welcome with us. Your voice matters to us. Let's read this book together and continue our path to learn more about the heart of God."

That, my friends, is how we cease to "look like the world." It's not about following the right rules. We don't own Truth. But we have an amazing God, one who will absolutely take our lives and turn it upside down for the good of others, bringing glory to himself and pointing others to Jesus. This is why I'm still a Christian: the hope of Jesus, the promise that he's bigger than any mess we get ourselves into. Clearly.
Posted by Kirstin C at 9:10 AM

Thanks for taking the time to leave a comment. All comments are moderated (because I won't post it if you aren't kind), so it may take a little while for your comment to appear.