That was my reaction when I saw the pictures of the two suspects responsible for the bombings at the Boston Marathon.

And one of those kids is now dead at age 26. I guess I should call him a young man. His younger brother, only 19, has the entire city of Boston looking for him. I wonder how it's even possible he'll be captured alive. Their family has publicly denounced them, an uncle calling them "losers" on national television.

I'm not saying their age makes what they did excusable. I grieve with the families of those killed and injured. I think what those boys did was atrocious.

But they are so young. And that makes me so sad.

Regardless of what happens as a result of the manhunt, there is no happy ending to this story. The death of the young men responsible for the bombing doesn't bring back the three who died, it doesn't reattach limbs for those who had amputations, and it won't erase the emotional scars of all who were there that day.

This won't be a popular opinion I'm sure, but while I grieve for all those who were lost or hurt in the bombings, I also grieve for the two responsible for it.  I am so sad that the first suspect has died. I am sad that the second one might.  I don't think more death makes this situation any better.

While I can't be wholly responsible for the actions of others, I don't believe any of us acts in a vacuum. I wonder what happened to those kids to make them capable of bombing the Boston Marathon. What happens to a soul to make one able to do such a thing? I have trouble squishing bugs... I can't begin to imagine what kind of soul-twisting would have to happen to me in order to make me capable of willfully harming someone else. How have we failed those boys? It sounds as if their family moved them here in hopes of a better life, a better way for their family.

So today, I'm praying. A lot. I'm lifting up the families of those who were harmed, for the families who are grieving. I pray for the family of the young men responsible - I can't imagine their shock and horror at what their family members have done.  And I pray for the boy on the run. He's a 19 year old boy. And he has done something unspeakably tragic and horrible. And his brother was killed. I pray for peace for his heart, that he will turn himself in, that God will work something miraculous in his life.

Because if you know any 19 year old boys... or any 26 year old young men... you know they still have a lot of growing up to do. We all did at those ages.

And I pray for all of us watching, those of us glued to the tv and internet, watching and waiting. I pray for our souls - that we won't be thirsting for more bloodshed, that we'll all seek the comfort and peace of our Creator and seek ways to treat one another more gently.

I love that dirty water...

I live in the South, with a capital "S." We drink sweet tea, I teach my children to say "yes, sir" and "yes ma'am." Kids attend church in smocked dresses and jon jons (okay, not mine, but most of my friends' kids!). My daughter wears BIG bows in her hair. My kids' words often have extra syllables. We live and breathe ACC basketball and bless each others' hearts.

But I grew up in Boston. And right now, I feel very far from home.

If you aren't from New England, you might not understand what a big day Marathon Day is. You probably think it's called "Patriots Day." Nope - we called it Marathon Day. Marathon Day is, honestly, the only day every year when I wish I still lived in Boston. I joke that I have sold out to the South... but not on Marathon Day. That day, my heart aches to hear someone say "wicked" and they don't mean evil.  I miss the gruff, "how ya doin'" you are likely to get on the street (if you get any greeting at all). Somehow, cuss words only sound right to me when said with a Boston accent. I might even whisper a few to myself on Marathon Day.

Growing up, we didn't go to school on Marathon Monday. We went to watch the Boston Marathon. My family's spot to watch was on Capitol Hill, not far from the finish line. I loved handing out water and oranges to the runners as they passed by. It was like having fleeting contact with a celebrity. We'd stand there, holding out our offerings, hoping upon hope that a runner would come by and grunt a quick "thanks" as he poured the cup over his head, ripped out the orange with his teeth, and threw the rind on the ground. Extra points if you were able to run and pick up the rind!

The Red Sox play at home in the morning, so that you can go to the game AND walk outside to cheer on the marathoners as they pass by at the same time.  The entire city is out, celebrating what it means to be from Boston. What it means to live in a city with such a wonderful history, where people live and breathe the Red Sox and Patriots football.  Where you spend your summers in the cold water on the Cape, go to Cumbies to get a soda, and take the T to Government Center on the green line. Where the letter "R" just doesn't exist.

Yesterday, I was shocked when my mom called me to tell me what had happened at the race. I'd been following along but quit after the winners came in (Yay Ethiopia, by the way).  I cried when I saw the photos of the finish line and couldn't bring myself to watch any of the videos.

And while the bombings will certainly impact what Marathon Day means for Boston from now on, I've never been more proud of my city. My hometown opened its doors; hundreds of people posted that they had space for strangers to stay the night, that they would pick up those who were stranded. Restaurants served meals, telling patrons to pay only if they were able. Stories came out about onlookers who rushed IN to help instead of running away. The perseverance of the 78 year-old man who was knocked down by the explosion but got back up and finished the race.  I know the spirit of a New Englander: tough as nails, intimidating perhaps, but there to lend a hand when it's needed. Loyalty is highly valued in Boston (just look at Red Sox fans).

Today I pray for my hometown. I'm homesick, wishing I were there. Not that there is anything I could do, but just to stand with my city. I pray for the family of little Martin Richard, praying for some comfort for them in their grief, that God will show up for them in an undeniable way. And for the families of those injured and killed by the explosions. I pray that God will make himself known and felt all throughout the city. May he bring peace and comfort where there appears to be no hope of it.

And I know Boston. Bostonians are like weathered old fishermen. Today will not defeat them. Marathon Day is not ruined. It's not stained. Boston will find a way to honor those who were harmed, those who served, and those who sacrificed yesterday. It will be part of the honor and spirit that is Marathon Day. Whoever did this will not win. Fear will not win. Courage, sacrifice and honor prevailed yesterday.

I love that dirty water... Boston you're my home. 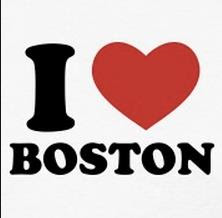 Sorry for the delay on a Dress for Change update... my sister-in-law and her family came to stay with us for a week! Which means we had seven kids in our house for awhile! It was tons of fun and tons of craziness... :)
Cutest kids ever, right?

So anyway, I did it! I wore the same little black dress for seven days! And even sort of halfway managed to look slightly different every day! And while I'm not certain how many dresses will be sent to Little Dresses for Africa for girls who really don't have enough to wear, I was really excited to get to participate in something like this!

Day One: Okay, so I spent most of the first day in my pj's because I was doing a StreetWatch work day, organizing our storage facility. But once I got home and showered, this is what I wore!

Day Two: It was spring break but we had two birthday parties this week so I had the chance to see my sweet friend Shannon, who was doing it with me!

Day Three: The second birthday party! We look so different, don't we? I can't begin to tell y'all how wonderful it was to have a friend doing it with me! I have another friend in Texas who was doing it too so it was nice to see her picture updates every day, too!

Day Four: It stayed pretty chilly during our spring break week so I just added a long-sleeve shirt and a scarf that my mother-in-law gave me from Connected in Hope


Day Five: So I'm kinda proud of myself about this one: I altered an old pair of jeans to make skinny jeans!

Day Six: I was at the beach for my college roommate's bachelorette weekend! So I didn't get a good color picture, but I was glad I could get the dress to work for me to go out to dinner with these beautiful ladies.


Day Seven: LAST DAY! All I had to do that day was drive home from the beach and then chill with my fam, so I didn't worry too much about it. My lovely friend Kerri was nice enough to take the picture with me, since I hate being in photos by myself! 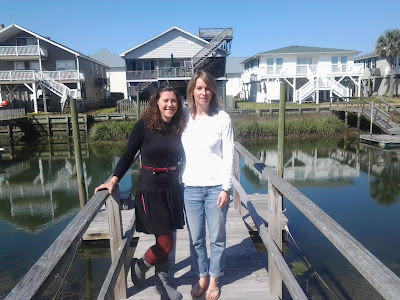 It really was a great experience... and I've played around some on the official Little Black Dress project page. I'm thinking this fall I might try to organize a month-long fundraiser. So.... friends, be thinking about if you want to join me in wearing the same little black dress for a MONTH this fall! :)
Posted by Kirstin C at 11:42 PM No comments: